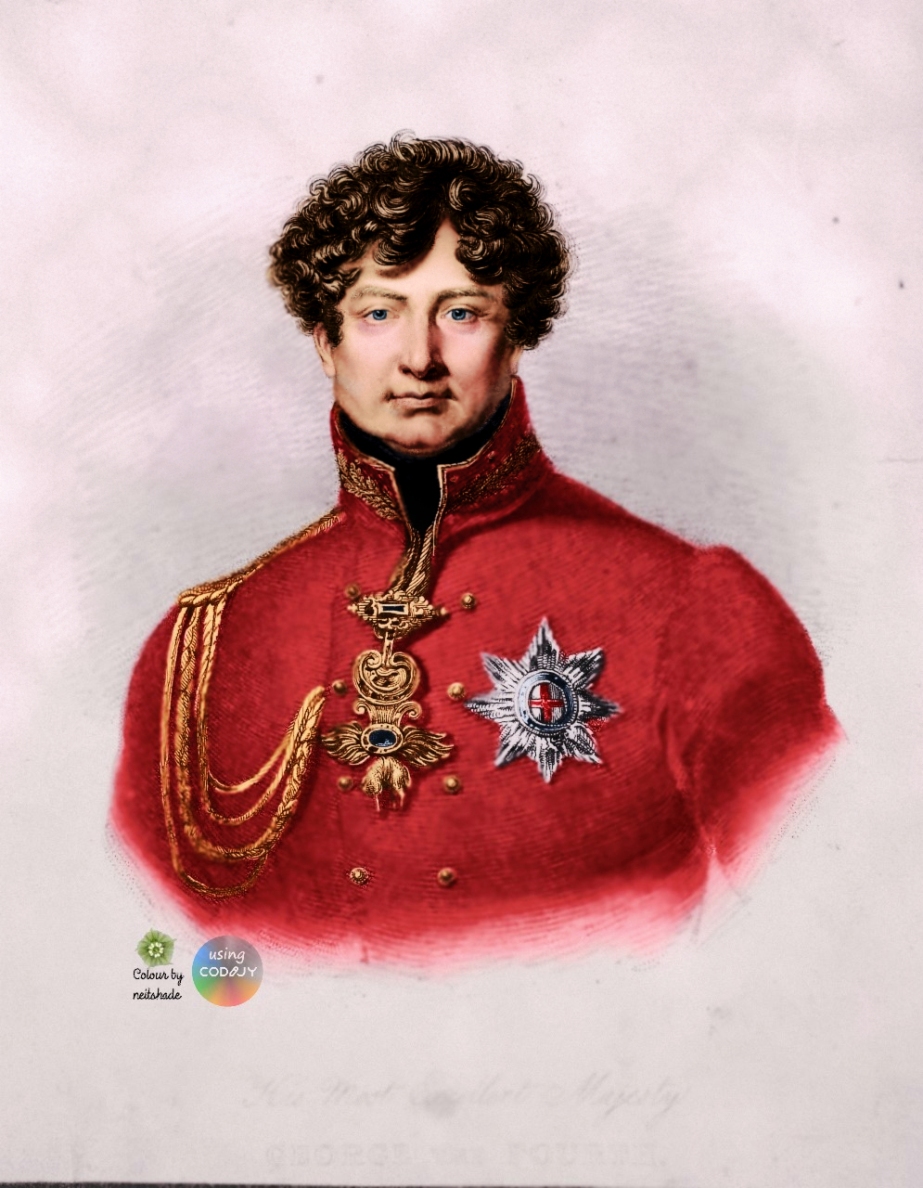 King George IV, probably in the early 1820s, shortly after his accession to the throne. 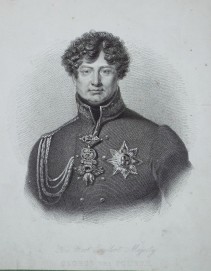 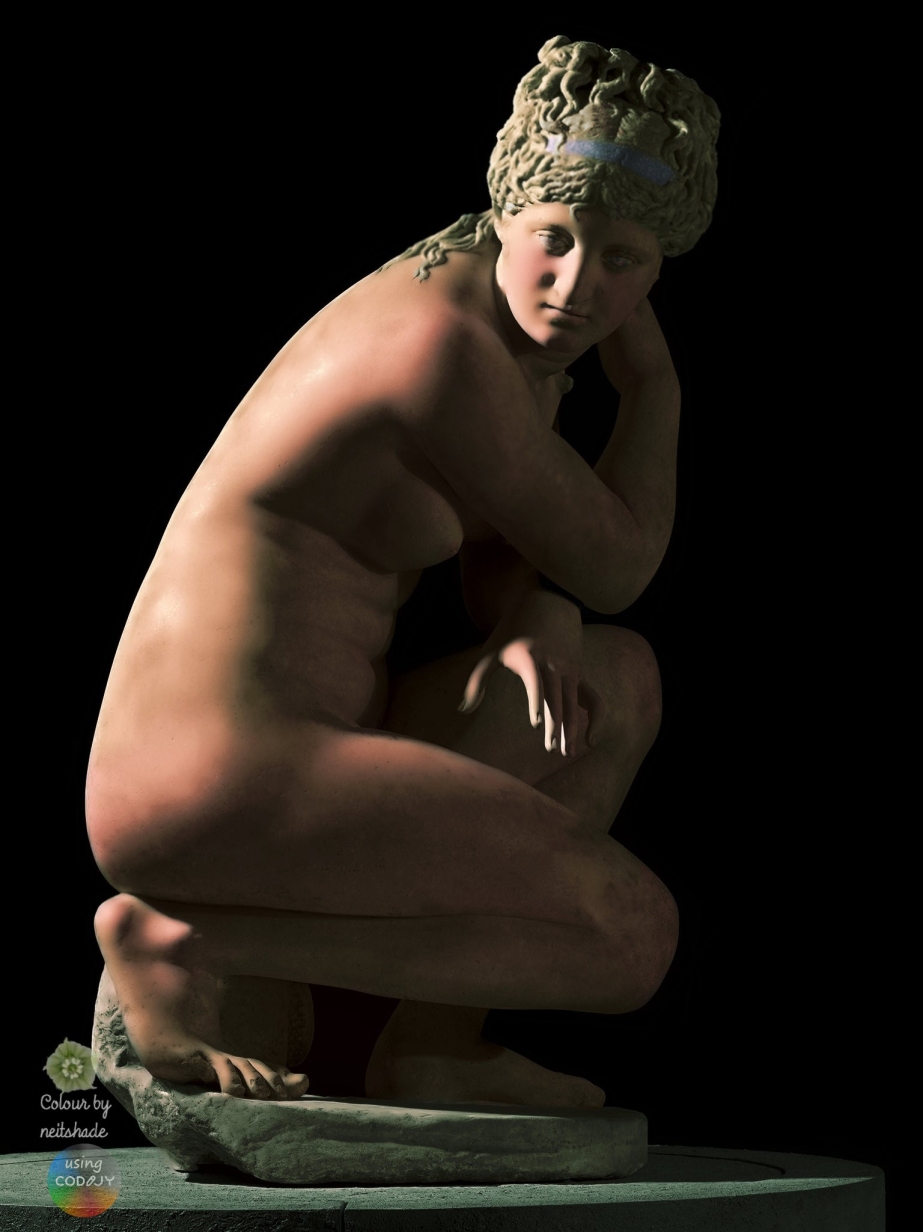 One of many depictions of Aphrodite, or the ‘Crouching Venus’, this one a Roman version from the Antonine period (2nd century AD) based on  a Greek original from 200 BC. 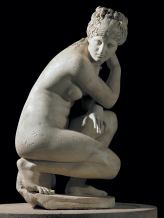 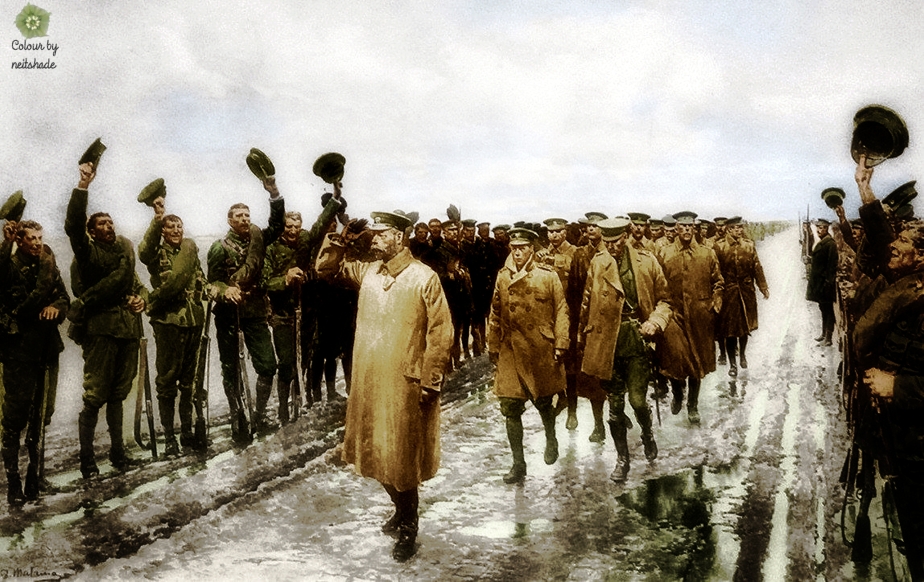 If this drawing of King George V, accompanied by his eldest son Edward Prince of Wales (the future Edward VIII), visiting British troops on the Western Front in 1916, resembles a photo in any way, it is entirely due to the skill of the artist, Fortunino Matania.

Matania was famous for his realism, and his World War One drawings scored over photographs of that era because they didn’t look staged. If this had been a photo, most of the people in it would have been staring nervously at the camera! 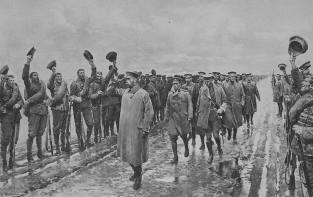 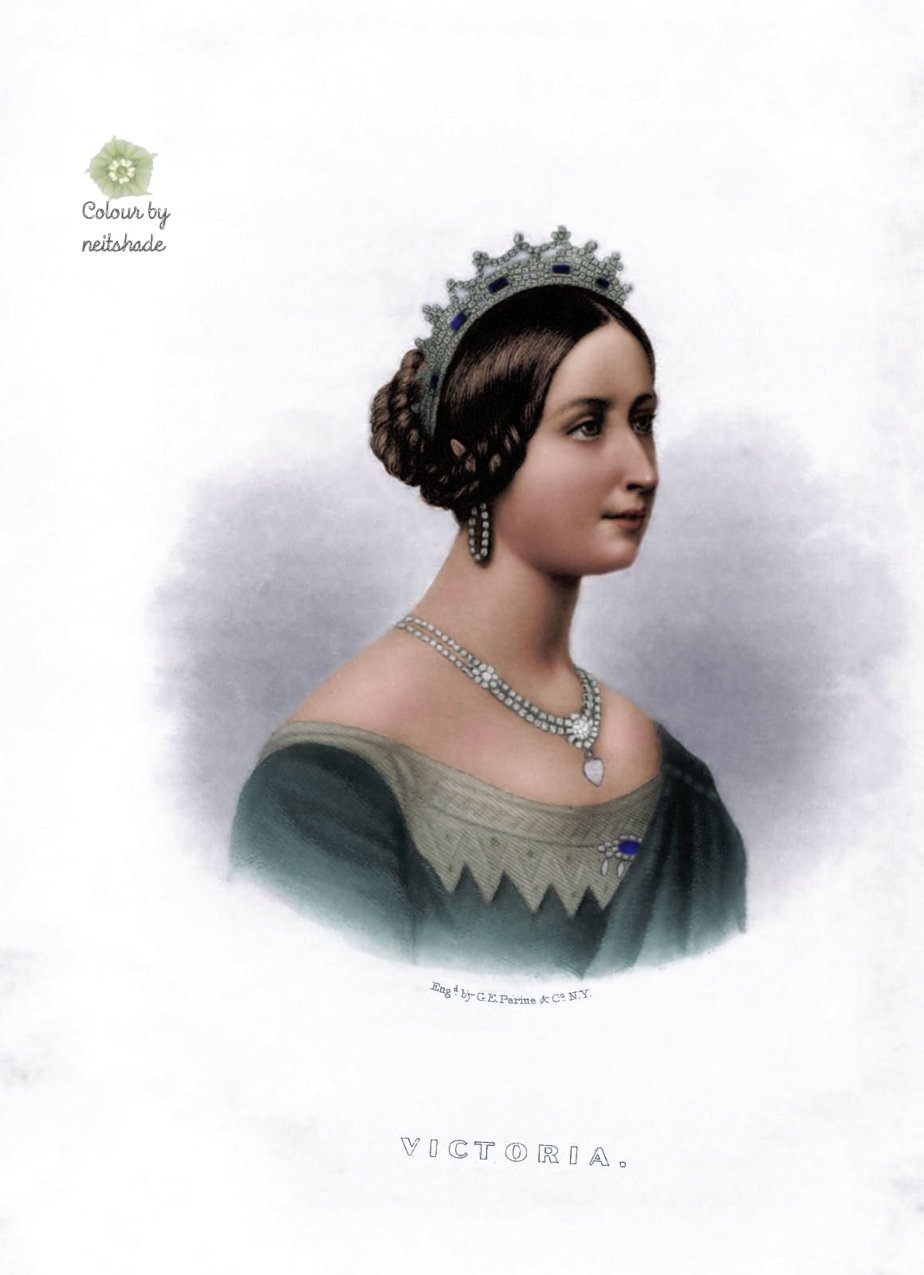 Queen Victoria’s reign began in 1837, two years before Louis Daguerre presented his daguerreotype process to the world so, although she was an “early adopter” of photography, the earliest photos of her, as far as I’m aware, are from a reconstruction of her wedding that she and her husband, Albert, undertook just to get the wedding album!

There were, of course, paintings, but I find engravings to be much more natural looking, and they are useful for me to practice on. Many photos are grainy or damaged, and some of the techniques for repairing them work on drawings too.

This engraving was made in 1868 in New York, but it depicts Victoria at around the time of her accession. The tiara she’s wearing looks like one Prince Albert gave her some time after they were married, in 1840, and I’ve coloured it accordingly, but it was probably a bit of artistic licence. 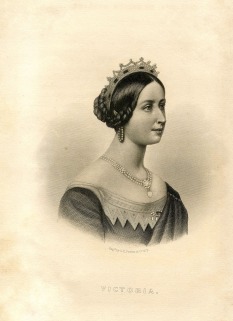 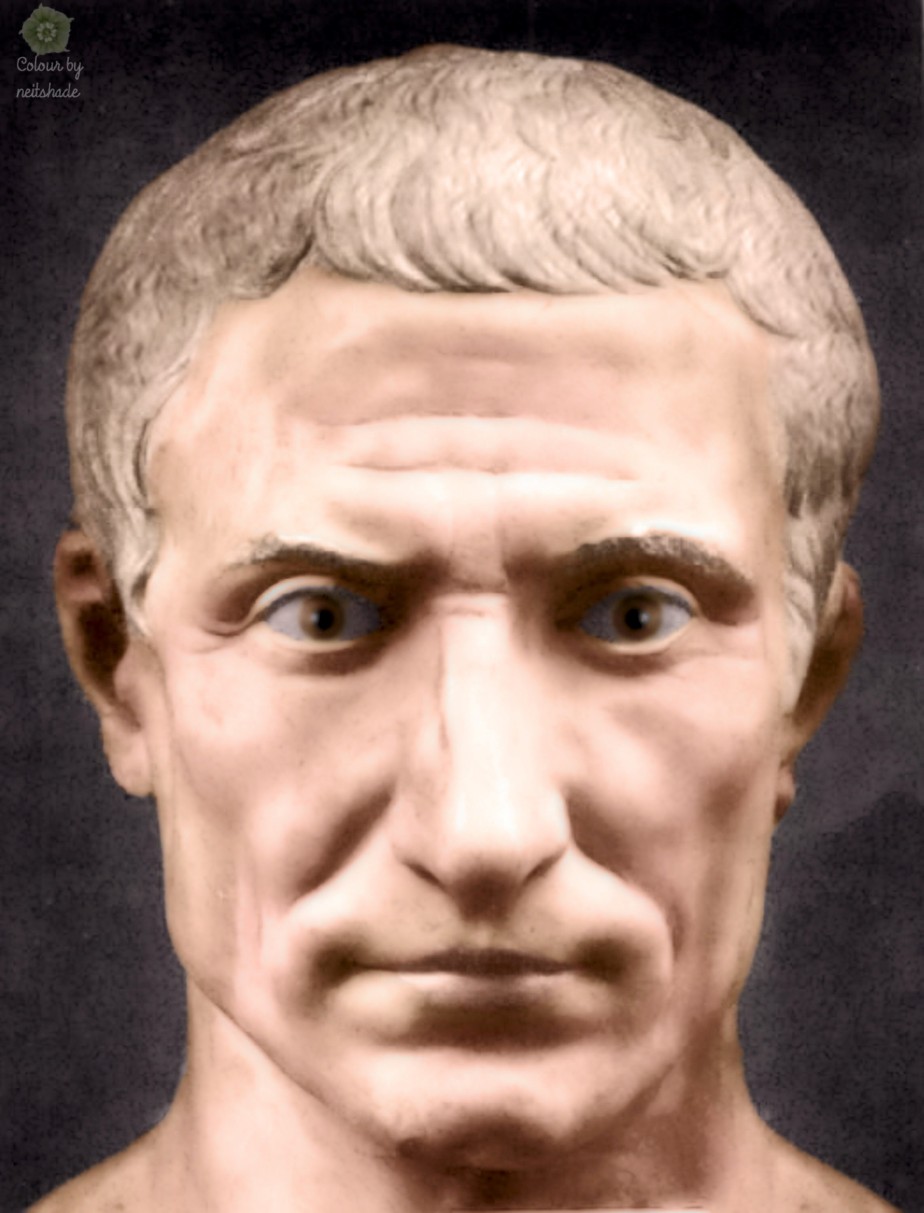 The camera obscura was known about in Roman times, but photography was a long way off. The most lifelike depictions of people then were statues. This bust of Julius Caesar was probably made a decade or two after his assassination in 44BCE, and was most likely painted, including the eyes. The paint has long since disappeared, giving this and other sculptures a blank look.
As well as giving Caesar his eyes back, I’ve added what I hope is a more realistic hair texture, which would have been difficult to do in stone. The face is all the work of the sculptor though, and I’ve just added the colour. 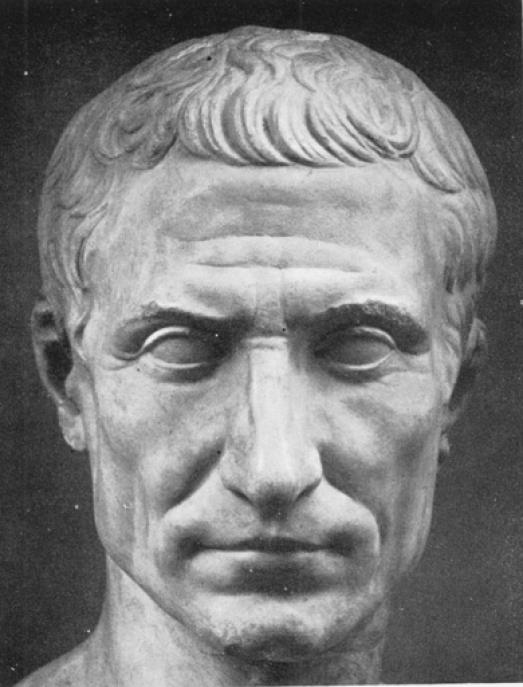 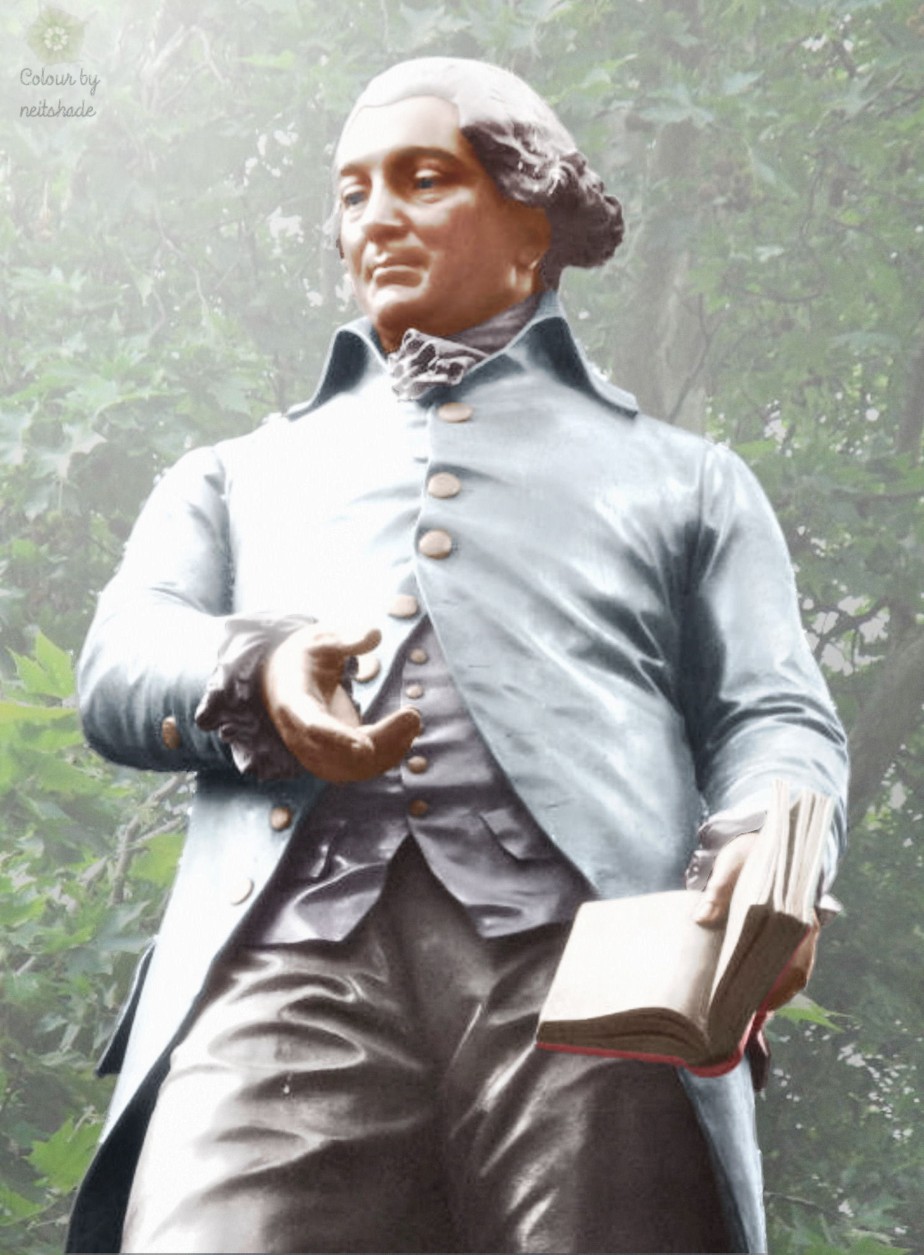 If you enjoyed/hated going to Sunday School, Robert Raikes is the person to credit/blame.
He started his first Sunday School in 1780 and, by 1831, Sunday Schools were teaching 1,250,000 children a week. The original purpose of Sunday Schools, to teach children who wouldn’t otherwise get an education, was largely superseded by the 1870 Education Act. 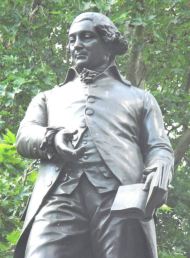 Photo by, Robert Freidus, of the bronze statue of Raikes made by Sir Thomas Brock in 1880, which stands in Victoria Embankment Gardens, London. Read more at this link. 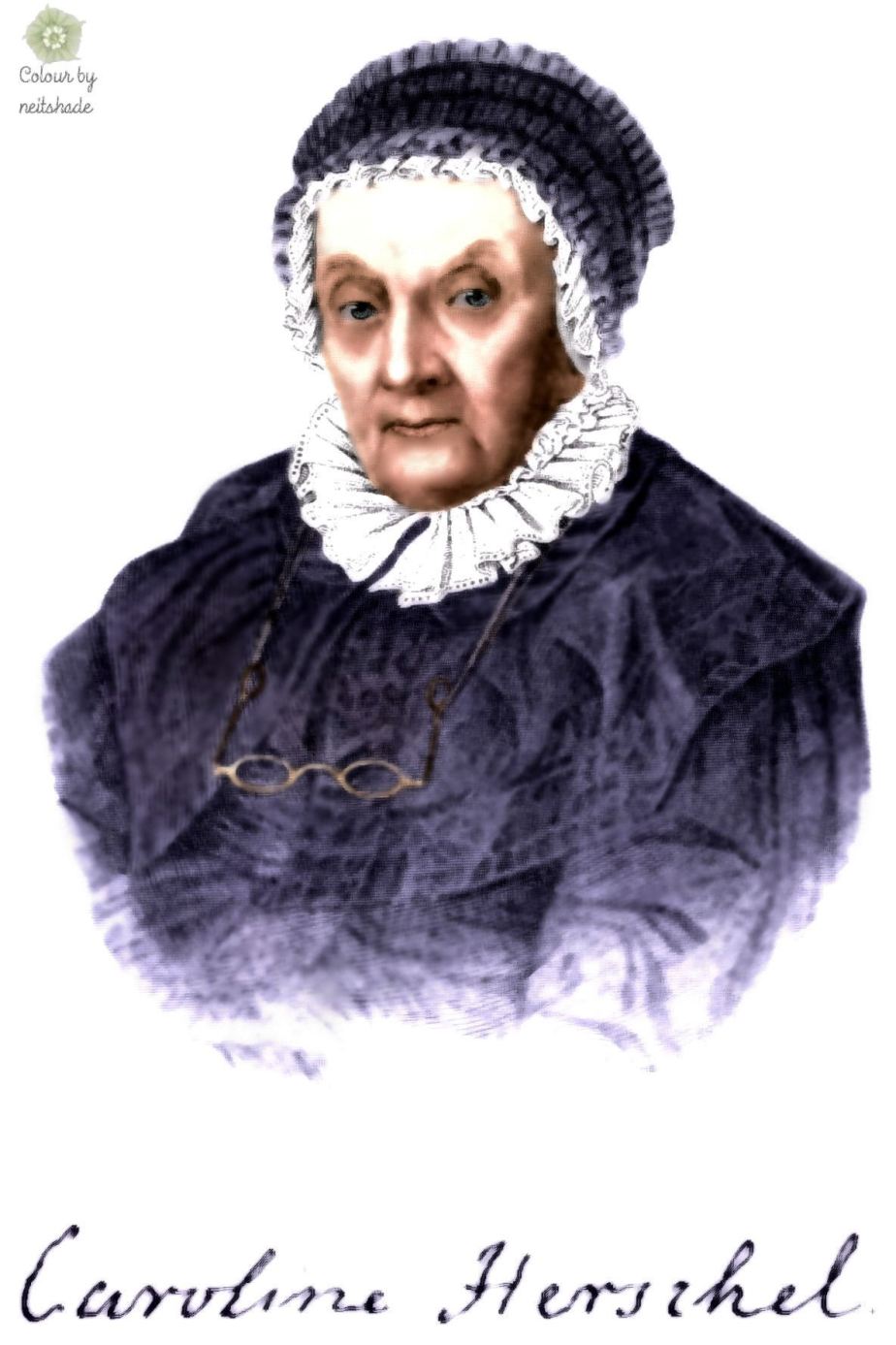 Working with her brother, astronomer Sir William Herschel, she discovered several comets and including the periodic comet 35P/Herschel-Rigollet, which is named after her. 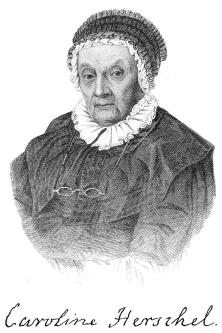 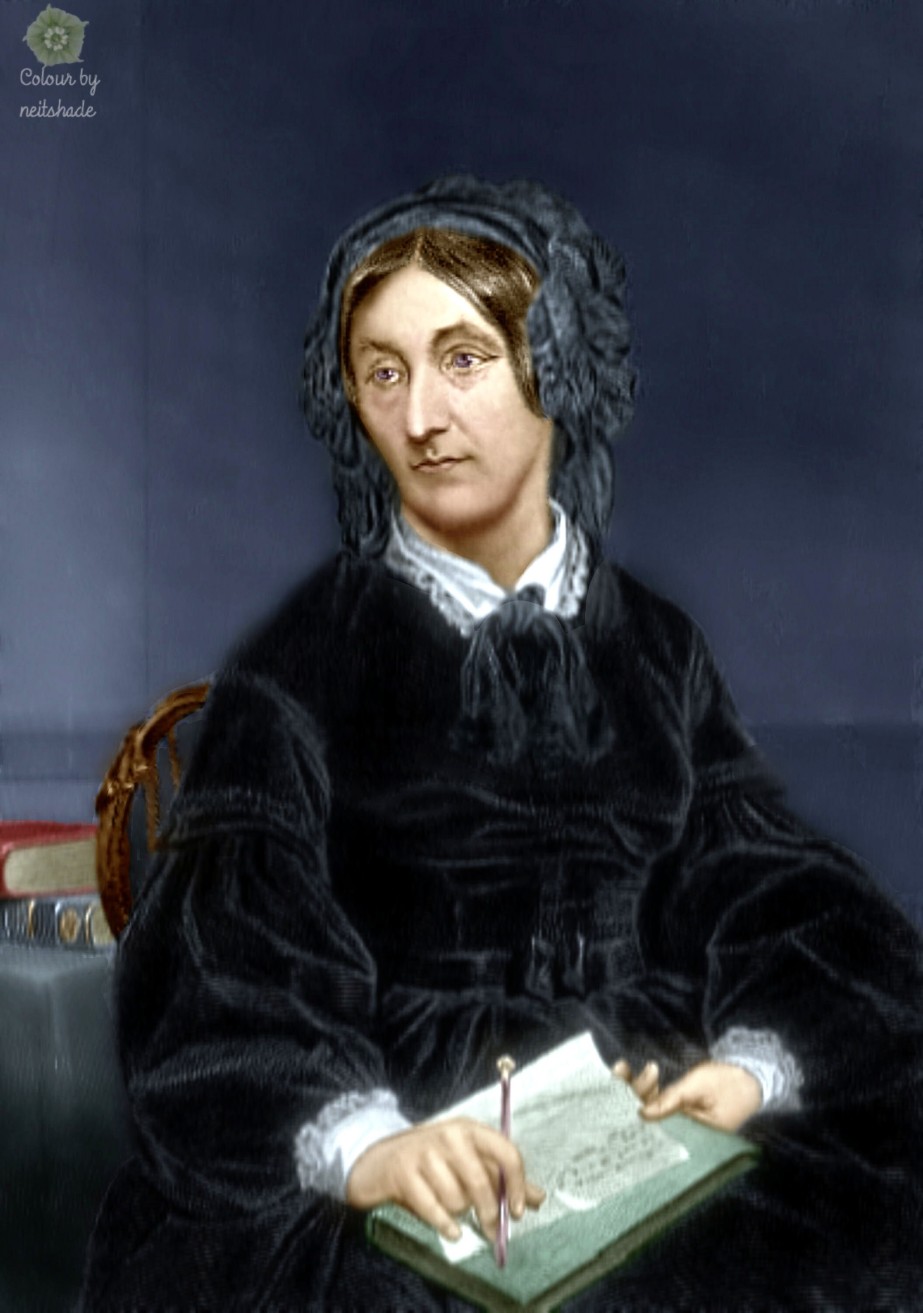 Mary Fairfax was born in 1780, at a time when women just weren’t expected to participate in intellectual pursuits like science yet, along with Caroline Herschel, was nominated to be jointly the first female member of the Royal Astronomical Society.

She was married twice, first to Samuel Greig then, five years being widowed in 1807, to Dr William Somerville, who recognised and encouraged his wife’s scientific endeavours.

Pierre-Simon Laplace once told her, without realising that Mrs Grieg and Mrs Somerville were one and the same,  “There have been only three women who have understood me. These are yourself Mrs Somerville, Caroline Herschel and a Mrs Greig of whom I know nothing” 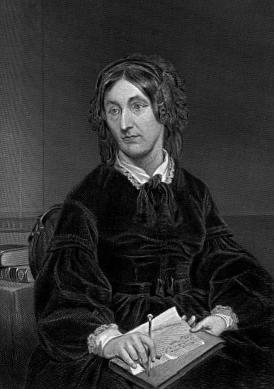 Original engraving, published in 1873, a year after her death. Date depicted unknown. 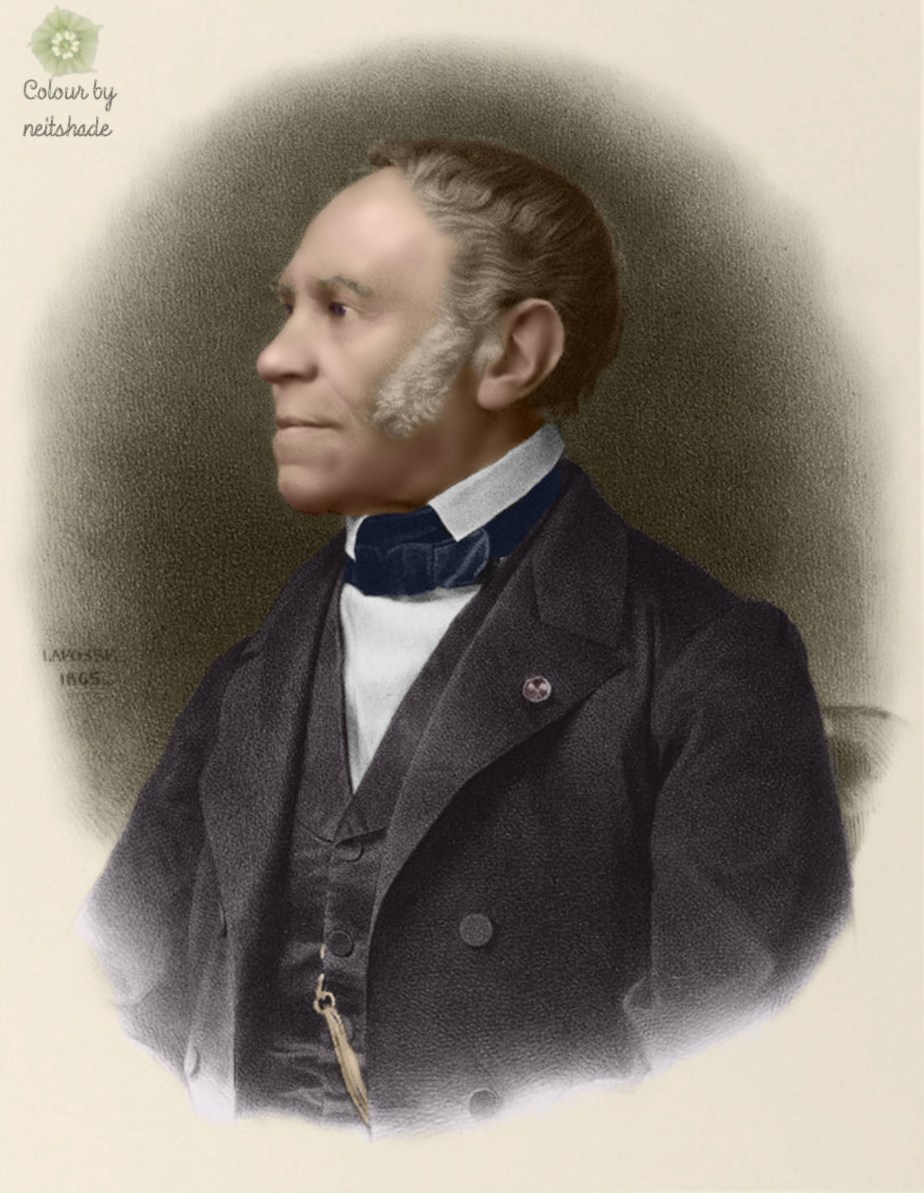 Anselme Payen, the French chemist who discovered the enzyme diastase, and the carbohydrate cellulose. 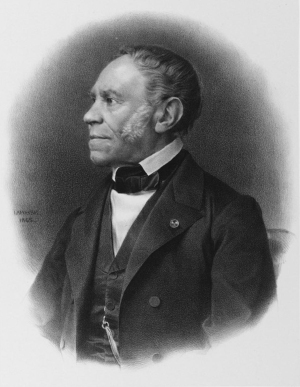 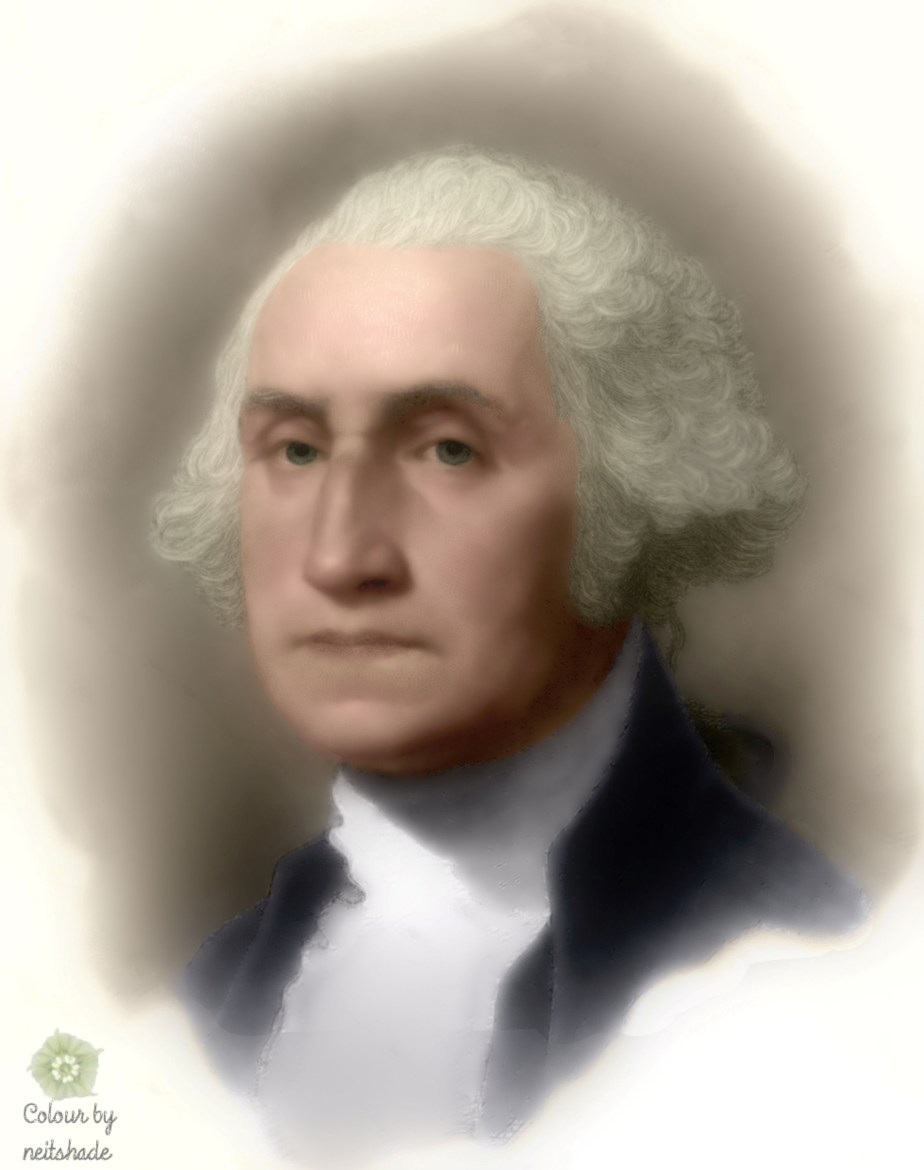 George Washington, in 1789. The original portrait, by Gilbert Stuart, was never finished, apart from the face, which was used to make several copies. Engraver Henry Wright Smith used it, around 1879, to make the engraving I’ve used here. 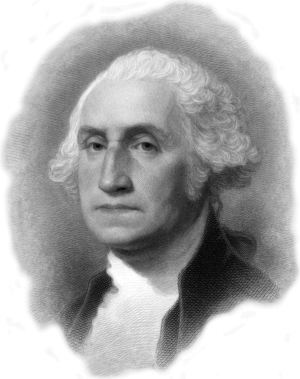 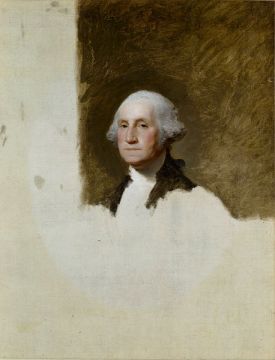